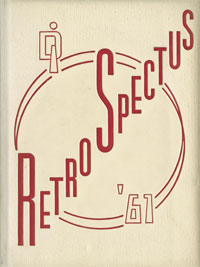 Download the full 1961 Retrospectus in three sections. It is a text-searchable, high-resolution scan of the complete yearbook. 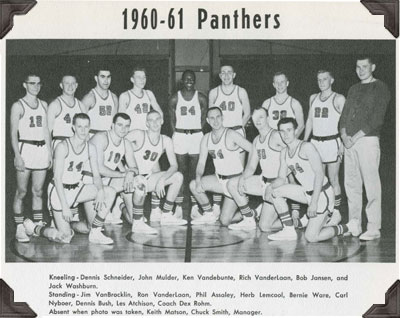 "For the second year in a row, Davenport Institute's Panthers continued to dominate the Michigan Business School League by winning the State Championship. They did it with the brilliant playing of John Mulder and Bernie Wore by defeating Detroit Institute of Commerce, 94-78. "Mud" hit for 27 points, his tops for the season, while Wore added 26."

"Wore was the big scorer for the season for Dl, overaging 26.5 points per game. John Mulder, voted most valuable player of the team was next with a 15 point per game overage. Bernie had his best night against Muskegon with a 41 point outburst. The team's biggest night was a record-setting 103 against Jackson."

"Hopes are high that next year, games will be scheduled with four-year liberal arts schools."